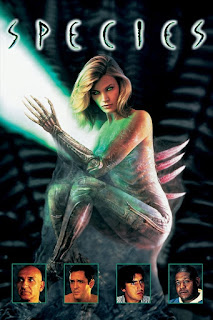 This film, Species follows the “growing pains” of a young female of the extra-terrestrial variety (human and alien DNA spliced).It all starts when Earth bound scientists receive a reply to a transmission from outer space. Said reply contains information on both an energy source, and a way to splice alien DNA with human DNA. Scientists follow through on the splicing experiment and Sil is the result. She grows from infant to superhumanly strong adult in body in the space of a few months. She doesn’t have the same mental maturity of an adult but an overwhelming desire to mate and reproduce.

Of course the team of scientists can’t contain said alien visitor due to her superhuman strength and abilities and she absconds from the care of the government facility she was contained in. Her alien DNA transforms her body into that of a VERY attractive young woman (who can’t seem to keep her clothes on). Sil goes on the hunt for males to mate with and then destroy. Very saucy stuff indeed :). Its then up to the US science types that were studying her to track her down and stop her killing rampage, and more importantly make sure she doesn’t reproduce. The effects of which could be catastrophic for the human race.

I have to say some of the horror effects in Species seem a little dated by modern standards. It doesn’t take away too much from the film, but it is noticable. The aliens are designed by none other than HR Gieger (who was responsible for the aliens in the Aliens series of movies). His creations really add a nice touch to the film. It’s visually really cool to see his art come to life.

THE VERDICT ON SPECIES

As a film  Species is not too bad really. I wouldn’t call it an all time classic of either the sci-fi or horror genre but its a solid watch and quite entertaining from start to finish. Despite the panning it got at the hands of serious movie critics, i quite enjoyed it. Overall my only real complaint with this movie is that it could have been much better with a little more of a budget behind it. A bit more time spent on the special effects would have really taken this to the next level. Species as a film did rather well at the box office raking in a massive $113 million in box office takings! Pretty darn good, if you ask me!

There is unfortunately no decent rips of this on you tube but it is available for rent on YT. Better yet it shouldn’t be too hard to track down in second hand haunts and flea markets.


Ben Kingsley as Xavier one of the scientists responsible for creating Sil.

For more great horror movie reviews be sure to check back on https://www.gorenography.com on a regular basis!