I’ve been trying to track Boxing Helena down for ages to check it out. Not much chance of seeing this one at your local DVD outlet, so I had to stream it on one of those ‘free to watch’ sites. I don’t normally advocate those but I guess if you’re not likely to find it anywhere else what can you do? This one is well worth the effort of finding it anywhere you can! 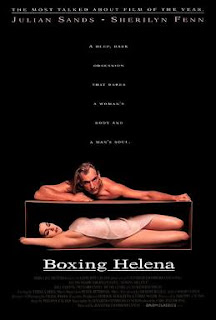 This film revolves around Dr Nick develops an unholy obsession with a one night stand he had, Helena. Try as he might he can’t get her out of his head. To be fair, Helena is one of the most beautiful creatures walking the earth. After watching this film I think I’m a little obsessed by her. Filling out her role perfectly is the gorgeous Sherylin Fenn.

Helena is a man eater. She is sexy and she knows it. She manipulates men and throws them away like garbage. As a bizzare twist of fate (helped along by Dr. Nick) would have it our dear Helena gets in a car crash and Dr. Nick seizes the opportunity to take care of her in his own premesis. In an effort to keep her on site he amputate her legs and later on her arms. All in an effort to keep her to himself for his own perverted pleasures.

THE VERDICT ON BOXING HELENA

This movie is an excellently shot and produced film with Julian Sands (from the Warlock series of movies) perfectly cast as the creepy Dr. Nick. Even though its quite a well made film I feel a little ashamed at myself for enjoying it so much. There’s pretty much nothing I can really fault the film on though. This is a film that is made to unnerve and it does a perfect job of it.

I remember there was a bit of controversy when Boxing Helena was being cast as originally it was supposed to feature Madonna. She declined the role after she had agreed to it upon realising the nudity and concepts involved in the film (I can’t say I blame her either). Next up Kim Bassinger declined to be in the film for similar reasons. Despite such a genuinely disturbing plot and subject matter it failed miserably at the box office. This movie condemened to a live of obscurity and to be featured in blogs such as this. I guess similar to the role of Helena herself in some ways.


The deliciously creepy Julian Sands (Star of the Warlock series and Romasanta) plays the part of the Creepy and obsessive Dr. Nick almost too well.


The absoulutely stunning Sherilyn Fenn as Helena the man eating bachelorette who becomes the object of Dr. Nicks obsessions.