Day of the Dead marks George Romero’s third outing into the world of the undead. The first installment of course being Night of the living dead waaaaay back in 1968. Dawn of the Dead which followed cashed in huge (for a horror film) breaking into main stream territory in 1978. I would say the success Romero really deserved from the original film was long overdue, but either way it came with “Dawn”. The stage was set for a third instalment, thus came Day of the Dead. 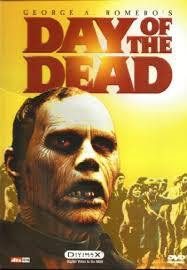 From what I gather Night of the Living Dead gained some notoriety for its gore content. This one would have given those same cry babies a coronary attack! The gore content has been upped ten fold from NOTLD and is another step beyond Dawn of the Dead. The gore and special effects are looking much better in this instalment!

The zombies in the night of the living dead looked pretty cool in black and white I have to say but the grey make up on the zombies in “Dawn” I don’t think really looked as convincing. This time round the zombies look a lot better and some more advanced prosthetics and special effects make up really set the standard that zombies should be at for the time. It makes for one hell of a blood bath, and fun ride for the viewer!

The movie itself fasts forwards to a point where zombies have taken over much of the free world. The last remaining humans, some military and some research staff have been isolated in a military bunker / research facility type thing and trying to figure out how they are going to survive. Despite the fact the undead have decimated the world population the research staff are still conducting experiments on how the zombies work. Even trying to domesticate them. The soldiers assigned to protect them can’t get along with the scientists. Tensions start to mount (much like the last two films) and the central characters find them selves in a pressure cooker situation. The tensions between characters does create a cool sub-plot to the story. This film is really cool as it analyses the zombies and allows the viewer to understand what makes them tick. We are exposed to the memories of their past lives and the instincts that keep them craving human flesh.

THE VERDICT ON DAY OF THE DEAD

I personally think Day of the Dead is a good departure from the first two films. It gives the horror fan a more cerebral look at the zombie. This one might be considered easier to watch due to the shorter duration of the film than “Dawn”. I think it runs a good length, and keeps the viewers interest though out the movie. It does start off a little slow but builds up nicely for a huge zombie filled finale of blood, guts and gore from our undead friends. For the conclusion of the original zombie trilogy I think its fitting. Modern horror fans may also find this one easier to go back and watch than the earlier two movies, as the filming techniques and cinematography are much improved.

Over all its a fun, but more intelligent look at the brainless undead creatures we have all come to love. Its sits along well with the other two classic films and is a more than worthy part of the trilogy. Definitely worth a watch for any gore / zombie fan!

I understand Day of the dead did not do as well as its predecessors. It still pulled in a very respectable $34 million and the Box office. It also didn’t get received as well as “Dawn of the Dead” by critics or even the public, but Romero felt it as his best work to date. For my money its hard to say either way as they’re all classics. All three of these are worlds apart. the movies unique in their own way but all entertaining and containing some good social commentary. Since then horror fans have ensured that it remains part of their collections for many years to come.

We managed to find  a good copy of this on you tube so go check it out while you can!