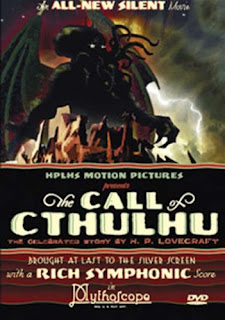 With the Call of Cthulhu, I make no secret of the fact I’m a big fan of the 1920’s author HP Lovecraft. This film really captures the emotion and mood of HP Lovecrafts works. A hard thing to do given the otherworldly nature of his writings. The Call of Cthulhu movie is a silent film with no dialogue. It is shot in grainy black and white. The film footage is cut with text/sign board dialogue but all of this only serves to obscure the and mystify the occult worlds created by Lovecraft. The gothic style music accompanying this creation and the production style suits his novella’s perfectly.

Given the production style, I assumed this film was made shortly after the book was written. As it turns out it was made in 2005 to fit the look and feel of a film made in the 1920’s. The time period in which the story was created.

THE VERDICT ON THE CALL OF CTHULHU

As a recreation of the golden age era of science fiction / occult / horror cinema this perfectly harnesses the theory that the scariest things are that which cannot be seen. Unfortunately for The Call of Cthulhu, the great beast that is the mighty Cthulhu is later seen. Unfortunately it wrecked things a little. The creature fx seemed outdated. I would have liked a bit more effort spent on the Cthulhu demon, but realistically that is how he would have looked had this film been made in the 1920’s anyway. Really, that’s my only grip with an otherwise captivating and authentic look back at the past of film making.

This vintage style of film isn’t for everyone. It is a magical film, and if you can get past the black and white and lack of dialogue its a very worthy watch! All Lovecraft fans should watch this!

Some other Lovecraft film adaptations:

Herbert West – Reanimator.
The Dunwich Horror.
In the Mouth of Madness.
Hemoglobin / Bleeders.
The Void.