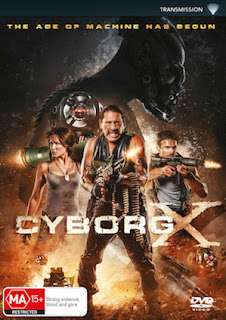 Cyborg X is a overall a pretty cool film, Starring the very easy to look at Eve Mauro and the always well tough Danny Trejo, as well as a whole bunch of tough guys I’ve never heard of.

The plot centres around “X corp” Who have been manufacturing Cyborgs for the military, that it turns out they can’t control. The cyborgs end up laying waste to the research/manufacturing facility and its up to Lt. Spears and her troops to figure out whats going on and hopefully destroy the renegade cyborgs. The film itself flows well and while its not strictly a horror film, more in the action category it should cross over well into both audiences as the violence is pretty meaty!

Is it a classic? No! but its not too bad, good, solid, fast paced (straight to dvd) film that doesn’t loose the readers interest. Sometimes you need a solid film that doesn’t require too much brain power and this is that film….