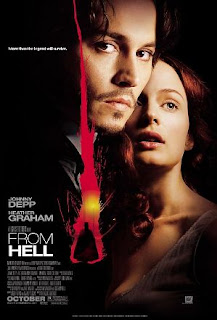 I really liked From Hell.  With star power like Johnny Depp and Heather Graham in it, it was never going to be a slapped together half cooked film. Of course, both Depp and Graham do amazing jobs at their roles. Aside from being two of the best looking humans on the planet they can really act their parts.

From hell is loosely based on the Jack the ripper story. For my money this is quite entertaining. No real dull moments in this film. The dialogue of the day is portrayed rather well,  and adds to the character of the film. I loved the accents and the time spent on recreating the old streets of London town. The clothes of the time are also skilfully recreated, also contributing to make the film great eye-candy as well. In short, no shortcuts were taken in the creation of this film.

The film of course stars Depp as the inspector Aberline, who is a recovering opium addict. He is also subject to visions that he uses in his quest to track down the Ripper who is killing prostitutes in the dark alley ways of London town one at a time. Aberline, of course takes a liking to Heather Graham’s character, Mary whilst trying to solve the murders.

I won’t go too far into the plot or get into how closely it follows the book for fear of ruining the plot. Rest assured there are some great twists and From Hell never gets boring. There is enough blood and guts to keep most horror fans satisfied but it wouldn’t fall into the extreme category by any means. Not an all time classic but a very solid and enjoyable watch.