The Call Girl of Cthulhu 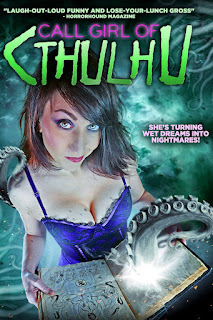 Obviously the Call Girl of Cthulhu is not something to be taken too seriously. Probably best enjoyed with either a few drinks or the day after a big night when you don’t have the mental capacity to watch anything more involved. It’s also obviously an indy film and probably done on a shoe string budget. As far as films go its not too bad at all and an enjoyable watch.

The Plot of Call Girl of Cthulhu

It follows the trials and tribulations of a young artist, Carter, looking to loose his virginity to a special woman. It just so happens the young lady he falls in love with is not only a hooker but also bears an ancient birth mark. A birthmark identifying her as the chosen concubine of the ancient deity Cthulu (from HP Lovecrafts works). From there on in Carter has to win the girls love, and save her from an ancient order of Chtulu Cultists who obviously have other plans for her.

Like I said, don’t read too much into it… Just turn your brain off and enjoy. As much as I’ve said this movie is not a “thinker” , but its not a “stinker” either. As low brow as it is, it still doesn’t insult the intelligence in the way that some (Troma type)  films tend to do. As far as the gore and horror content there’s some pretty cool SFX and gore scenes to keep the gore-fiends happy as well. A decent level of “perv factor” is present for those who are looking for a bit of “T and A” as a side for their horror needs. These guys are showing some great potential to keep making more movies and I’ll genuinely keep an “eye out” for more of their films in the future!