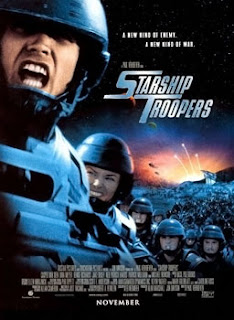 Starship Troopers has been widely panned by critics. I have to say I really liked it. Brought to you by Paul Verhoveen who was responsible for ROBOCOP this has a similarly dark feel to the not too distant future. The Dark humour present in ROBOCOP is also rather up and front in this movie too.

THE PLOT OF STARSHIP TROOPERS

The film itself is set in a future where an alien like arachnid / bug race has waged war on Earth. Dutiful citizens are being rallied to join the fight against the bugs known as “Klendethu”. Amongst the students at the military academy the fight are Johnny, the good looking but not too smart student who gets sent off to his almost certain death to fight in the infantry. His girlfriend Carmen who scored much better grades in the academy and gets to pilot a starship with the over acheivers, and (incredibly cute) third wheel Diz who has the hots for Johnny bad. Johnny is holding out to be with Carmen. Carmen being as beautiful as she is is soon the subject of the affections of the higher ranking pilots. Does our Johnny have a chance? To be honest its not that important, but it does add another level to the plot.

Some great special effects and alien creatures make this film look incredibly authentic. The “blood and guts” factor is nothing to be sneezed at either. Some reasonable star power in Neil Patrick Harris and Denise Richards also adds to the films credibility.

Overall, Starship Troopers is a great bit of fun. I do think if one is prepared to look deeper into the film there’s a little more (not too much) to think about. It also shows the horror of war and what it does to people. It changes people, some it endows with privelidge, others with money and many more with lifelong injuries. Demonstrated with many of the supporting cast sporting injuries like missing limbs that they would have acquired in the long running conflict. In a lot of ways Starship Troopers is a sarcastic look at war culture and the war propaganda of the past. A culture where its alright to send your children off into certain death.

Starship Troopers is also a great film to sit back and turn the brain off. Enjoy the high level of guts and violence that comes with an intergalactic conflict of this magnitude. The action is non stop, and he aliens look magnificent and the action scenes are fluid and never hammed up. This is top shelf violence! It would appear that I wasn’t the only one that thought so, as the film grossed a very repsectable $121mil at the box office (which still meant it was only just profitable compared to the $105 mil that was spent on the film) and spawned a series of sequels (of varying quality). The film, whist quite good was far too violent to compete with the likes of Star Wars, so in some ways the level of success it achieved was still quite remarkable.

For more great movie reviews make sure you visit https://www.gorenography.com on a regular basis!