Plan 9 From Outer Space was once described as the “Worst film ever made” . It’s not the greatest film ever made but in my humble opinion far from the worst. In fact it has a certain charm about it. 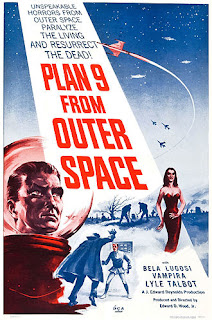 Shot on black and white film in the 50’s the plot revolves around aliens who are digging up graves and reanimating the dead in an attempt to destroy humankind. They do this to premptively stop humans from stumbling across the technology to build a weapon so powerful it could destroy the galaxy and of course our alien friends with it.

The special effects are pretty cheesy stuff. You will see the flying saucers obviously suspended by fishing wire! The dialogue is a little hammy as well. Like I said before this does add to the charm and and maybe a sense of innocence about the film that movies made nowadays rarely have.

For those that can put the low grade special effects aside,  Plan 9 From Outer Space is actually a pretty cool watch. It does raise some moral issues particularly relevant in the 1950’s with the advent of nuclear technology and the looming spectre of a world war. As a movie its nothing special in my opinion. Others will disagree. The movie has gained an undeniable cult status. It’s another movie worth watching if only from an historical perspective.

We manage to find it on youtube for your viewing pleasure! It’s actually a pretty good capture too!
For more great movie reviews check out https://www.gorenography.com on a regular basis!