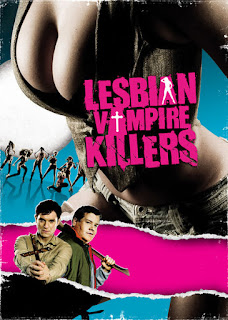 As the title suggests, Lesbian Vampire Killers is probably not a movie to be taken too seriously. It is however a lot better than the name would suggest.

The plot focuses on Jimmy who is getting treated like dirt by his on again off again girlfriend and Fletch who looses his job. They both decide to go on a holiday and forget about their real world woes in country side England. Luckily the pair manage to meet up with a van load of incredibly hot (Swedish, of course) female tourists. At this point I’m not sure how the Lesbian Vampirism comes into it (its either an old curse or a cursed town… or maybe they just hang around the nearby forest) but really, who cares. The girls of course are distractingly hot. One by one they get attacked by vampires and its up to to our two hero’s to save the day. Of course it is.

Over all its a lot of fun and quite well shot. Lesbian Vampire Killers is a lot easier to watch than other B grade films (like most Troma films for example)  and with plenty of scantily clad females, this one cruises along just nicely. Again its not a thinker but if you can turn your brain off for an hour and a half this is quite enjoyable and few good laughs thrown in. Not too heavy on the gore factor but a good one to watch while having a few beers with your mates.

To be fair to this film, I might come back and watch it a second time. Just to see if it has anything more to offer of course. I have a sneaking feeling though, its really just a light-hearted British comedy.