With Terminator Genesys the franchise continues. This would have to be one of my all time favourite movie series since the I watched the first installment as a 12 or 13 year old in the late 80’s. I thought parts 2 and 3 followed it up nicely and for the record I thought 4 was a good movie but it didn’t really feel right without the big man in front of the camera. This time Arnie is back (groan….) like he said he would be.

This chapter chronicles an ageing terminator who has once again been reassigned the task of protecting the future of mankind. This time by protecting Sarah Connor. 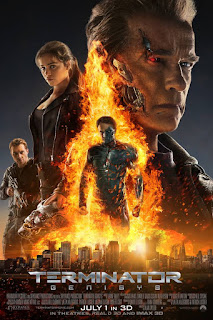 The great thing about movies involving time travel is there is really an infinite number of possibilities and therefore sequels that can be extracted from the one story line. This time the story line gets even more complex (I won’t give too much away).  The movie intertwines with the first two movies rather well I have to say. One standout scene where an ageing terminator goes up against a younger version of himself really helped make the film.

Of course the CGI is as excellent as you would expect it to be. Like previous instalments, there’s a newer model terminator that Arnie struggles to compete against. One criticism of this movie is it lacks the really BIG action scenes that part 2 and 3 had. Some of it is there but its not the same. That aside it is a great watch and a few cool humorous moments (similar to those in part 2) really make this a genuine film rather than just a second rate soap opera.

There are two ways you can watch Terminator Genesys. You can  either sit back and enjoy the ride and just turn your brain off or you can analyse the time continuum as it unfolds. This can be a bit mind bending as different time-streams get tangled up and rewritten by the minute. Both ways are equally valid in my opinion!

As always be sure to check back regularly on https://www.gorenography.com for heaps of great horror movie reviews