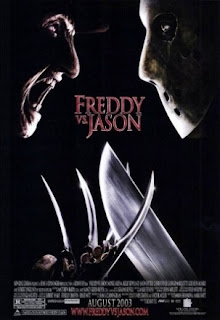 Freddy vs Jason came across as a pretty cheesy idea. Crossing over 2 of the most legendary horror franchises in all history was always going to guarantee some level of success for the film. But was going to further bury franchises that had seemed to lack in any real ideas towards the end of their repsective series? Or would it generate a new level of interest in the older films?

The film opens with a kind of introduction to the worlds of both protagonists. This means that at least to some degree you don’t have to have seen the other films (of either series) to be able to watch this film. Maybe the idea was to funnel new fans into the old franchises (which are now all available in box set form and proudly displayed in my collection)?

As usual the comeback scenario’s are a little dubious. Freddy is in hell and has no power as any memory of him has been erased from the collective conciousness of Elm Street. His idea is to resurrect Jason from the dead to wreak havok amongst the town folk and put the fear of Freddy Krueger back into the town. This gives him  a means to worm his way back into the dreams of the teenagers of the town. Actually not a bad plot idea! Can Freddy work with Jason? Can either of them be stopped? I guess you just have to watch the movie to find out!

I have to say the premise and the film work well enough to hold water. The rest of the film from there on seems to flow rather well too. It’s well shot and keeps the viewers interest from start to finish. I will go so far as to say not only is it a worthy sequel to both franchises, it is better than some of the later ventures into both series. Should also note that it has a pretty heavy soundtrack too featuring Machine head amongst others.

Over all, Freddy vs Jason a great watch and some cool creepy imagery keep this rolling along nicely. The gore factor is quite respectable too.  More importantly it fired up to watch the collective works of both series one more time! (which i’ll post up here in due course)

Be sure to check out other great movies in both these series: