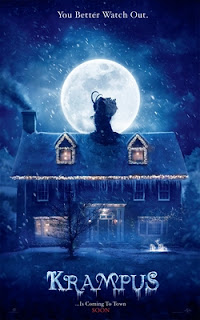 Tis the season of the demon!! The Krampus, a horned demon, is known in European culture as the antithesis of our dear friend St Nicolas, aka Santa. He punishes naughty children by whipping them with birch twigs or dragging them down to hell. Krampus visits every year during December . . . so, to celebrate, I’m reviewing Krampus, the movie!

The synopsis on the cover states this movie is “a wonderfully dark and subversive” film, and it surprisingly lives up to this claim.

The films opening sequence is much like any other Christmas movie- themed subtitles and a busy department store, a classic Christmas carol playing- yet the events that unfold are totally out of sync with its style, setting an undercurrent of dark humor which is delightfully sustained throughout the movie.

Little time is wasted on character development as the director has chosen to allow the actors’ appearance and costumes tell their story, and the situations in which the characters find themselves in are well paced, keeping the atmosphere tense and engaging throughout. The acting is also quite good, as expected from an ensemble of some particularly funny people, and the script has a decent number of quirky jokes both spoken and visual. The monsters we meet are camp, yet well realized, and Krampus himself is delightfully creepy.

There were plenty of interesting twists to the story without relying on cheap tricks such as jump scares, though be sure to look out for one in the first half of the film- its payoff is well worth the set-up.

I enjoyed this film much more than I expected- it’s definitely one I’ll watch again!