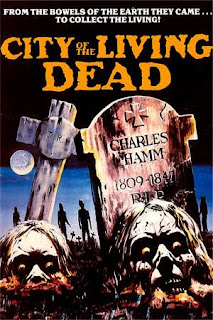 City of the Living Dead was Directed by Lucio Fulci (Zombie Holocaust) in 1980. Not to be confused with the works of George Romero, this is a pretty cool watch. It never really made a huge impact at the box office. Over time has sunk further into obscurity. Shame about that. It’s not a bad film really. Thankfully through the magic of youtube and now the cult cinema guys who repress a lot of this stuff, many long lost movies like this one can be exhumed for new generations of horror fans to enjoy.

The plot has some deeper occult references than the typical zombie movie. This will always scores points in my book. Basically the film follows the story of a group of women who in holding a seance see visions of a city of the dead. A town called ‘Dunwich’ (a name which HP Lovecraft fans might recognize) and their imminent rise to the realm of the living.

Overall a well shot film with nothing too cheesy. The musical soundtrack compliments the film well that old style horror soundtrack that movies these days just can’t do. The special FX are cutting edge  / over the top gore for that era  (especially the flesh vomit scene).  I have to say some parts come across as a little corny now but nothing that would take away from the feeling of the film.

Defs worth the time it takes to watch this film. I wouldn’t go so far as to call City of the Living Dead a classic but over all its pretty cool.  As luck has it we’ve managed to find it on youtube so you can check it out yourself. But defs worth buying a physical copy of this one.

For more great horror movie reviews and other crap https://www.gorenography.com .