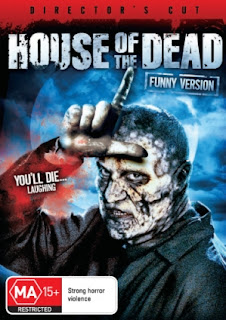 What happens after the immense failure that was the house of the dead movie (click the link for that review)? One would have thought the director would have crawled into a hole and died (or at leaset committed most honourable act of seppuku). But no. He re-released House of the Dead funny version as parody of the original version. This time with stupid little captions pasted over everything. Gotta hand it to him. At least the guy can take the piss out of himself.  To be honest its still shit, but its a much higher standard of shit than the original and now falls into the ‘almost watchable’ class of films. Still no real plot and a very ‘stock standard’ film with little to no acting credibility but at least now, with the additional captions, new footage we can all have a laugh at the film and its many plot holes. Strangely enough some additional footage taken from the video game and haphazardly pasted into the onscreen action, really steps things up a notch. Now with this version we’re kind of laughing with them and not at them. Kind of, but not really.