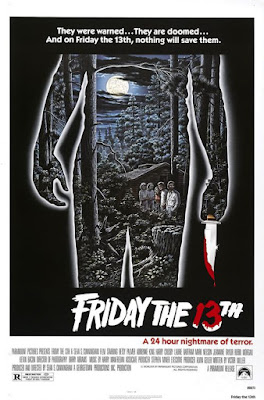 Friday the 13th is one of the greatest horror movies of all time, without question. The film responsible for introducing a whole generation (of then)  teenagers to discover the simple joys of the slasher flick. Paving the way for many horror franchises to come.

Set in the present time (of 1980 ish) a group of hormone filled teenagers volunteer to work at a summer camp. The newly re-opened Camp Crystal Lake has new management but is hiding an old secret. Upon arrival to the nearest town the teenagers are warned of a mysterious drowning death in 1958 and a couple of violent killings that took place at the camp the following year in 1958. The camp was shut down soon after and the murders never solved. Only to be re opened again 20 odd years later under new management.

In true horror movie style nobody heeds the warning of the locals. One by one the the teenagers start getting killed. Obviously most of you will have probably seen this movie. For the few people on the planet who haven’t yet had the pleasure (or are lucky enough to be too young to have seen it)  I won’t spoil the plot beyond that.

Needless to say there are some excellent plot twists which makes the movie quite unique for its time. Perhaps it is reminiscent of Alfred Hitchcock’s “Psycho” in some ways?  I will say however that this film is well written and beautifully shot. I have it on DVD so I’m not sure if my version has been remastered. Either way,  it’s a great watch and holds up well to this day. The actual horror, while not considered over the top by todays standards, I think would have been considered pretty confronting for the time (aside from the more extreme films like Dawn of the Dead and the wave of Italian horror/cannibal flicks surfaced around the same time) as the death scenes do look fairly realistic.

I couldn’t find a full version of the movie on you tube (which is fair enough as the movie still probably sells well). It shouldn’t be too hard to buy. It’s always worth it as a standalone film release. If you can find the 8 disc box set of the first 8 films its definitely a box set worth having as well. If  not hunt it down at any second hand haunts you may have. I’m sure you’ll find it somewhere.

Also be sure to check out our reviews of:

For more great movie reviews and recommendations be sure to check out https://www.gorenography.com regularly!