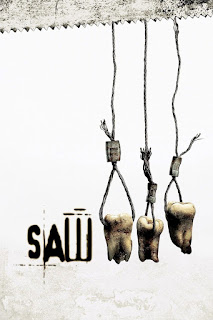 Saw 3, for a movie about love this was pleasingly gory. Those involved in the Saw franchise have a pretty solid grasp on how to create realistic looking special effects, and the traps depicted are always interesting. The traps depicted in this installment, however, were not possible to escape and I did find this slightly annoying- stick to the formula, guys!! There is no point in creating the psychological tension associated with ‘playing a game’ if the dice are loaded.

Now, why a love story? It primarily explored secondary feelings such as jealousy or grief that are created when a person loves another and the influence these secondary emotions have on the psyche, through Jigsaw’s games and the choices his victims made. While some of these choices came across as standard dumb-arse horror movie mistakes (cue shouting at screen “Just tell him you’ll die!!” “Use your damn shirt!!”), some were plausible and supported by convincing acting.

The director of Saw 3 used flashbacks to fill in the backstory of the characters, notably Jigsaw and his assistant, while these scenes would make more sense to those who have seen the previous movies they did not feel too much like mere padding. The cinematography was standard for the genre, somewhat dark and plenty of close shots focusing on actors faces or gore. Overall, a decent watch- not intellectually challenging, or a movie that would leave one shaken, but a nice enough way to while away a few hours.

Be sure to check out https://www.gorenography.com for more horror movie news and reviews!