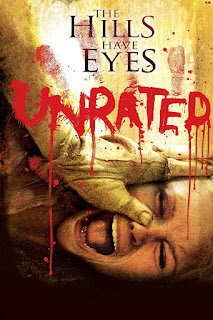 The original “The Hills Have Eyes” (directed by Wes Craven) from 1977 was an intensely creepy and engrossing affair. Wes Craven has returned to reboot his own film again in 2006. I’m glad Craven got to give his own film the treatment he wanted. Too many times another director comes in and misses the point of the original movie completely.

I have to say I think this is a worthy remake. Is it as good as the original? Not sure, I can barely remember the original as I watched it so long ago. Either way this is a great film for those that never saw the original and a great re-boot.

This one centre’s around an extended family travelling across the American desert. They break down in the middle of the desert. At least thats what they think, they’ve been set up and used as prey for a colony of badly mutated hill dwellers. The colony have been living out there for years after falling victim to radiation poisoning the result of nuclear testing there. They have degenerated into deformed cannibals who prey on anyone who unwittingly falls into their territory. The travelling family don’t realise how much trouble they are in at first, but its not long before the full impact of their predicament dawns on them.

Their sudden stop tests the existing tensions within the family while they figure out a way to get out of their predicament. A family divided of course makes an easier target and while the grandfather goes back into town (the nearest settlement with human life and a petrol station) the creepy children of the dirt circle in on the family. One by one, they commit gruesome atrocities on the unsuspecting family.

I found The hills have eyes to be immensely watchable and genuinely disturbing. From what I remember the gore has been amplified substantially from the original. This is not easy going for the horror newbie. Out of all the horror films I’ve reviewed here this one is still one of the more extreme watches out there. If you are easily offended this may not be the movie for you. While its impossible in my opinion to capture the feeling of those 70’s horror flicks this does make up for it in other area’s. Definitely worth checking out! The mutants are gloriously hideous. They really make you feel disturbed on an almost spiritual level. The gore in this is top notch. So to the cinematography. Being directed by the master that Craven is this is a great movie.

Judging by the box office take, I was not the only one who thought this was a worthy watch, the movie taking in massive $70 million at the box office, making it one of the bigger box office hits. No mean feat for a movie that earned itself an R rating.