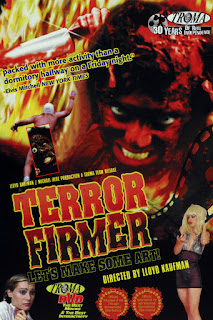 For some reason known only to myself, I decided to pick Terror Firmer as my horror flick for the week :/ .


Troma films have a habit of being painfully shite. Luckily I found this one at flea market (as there’s no way I’d pay full price for anything Troma release).

This one takes place on the set of a horror flick, while a serial killer picks off characters one by one. Beyond that, there doesn’t seem to be any real plot to this story. It does provide a few cheap laughs, cool gore scenes, and gratituous nudity. So at least its not a total waste of time.  The best way to approach these films is not to think too hard about these things. The directors certainly didn’t. Just turn off the brain and sit back and enjoy the brain dead horror fest that follows in the retarded footsteps of many Troma films before it. As an added bonus Troma co-founder Larry Kauffman plays a blind film director (which judging by their past efforts may explain a few things). This does add a cool feeling that they can take the piss out of themselves. There’s some cool cameos in this too (most notably “Lemmy” from Motorhead) but really nothing will save this film or lift it out of the gutter in which it dwells.

Watch Terror Firmer once if you’re bored shitless for some reason, or you’re too hungover to think . I can’t see myself watching this one again to be honest but it wasn’t a total waste of time.

If you’re really into B grade schlock be sure to check out other Troma films such as The Toxic Avenger part 1, part 2 and Cannibal the Musical