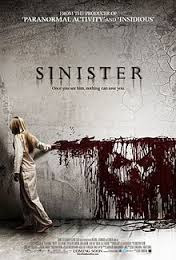 Sinister is a pretty cool little affair directed by the same guys that brought you “Paranormal Activity”. Based on that alone, you know its going to be fairly decent.

The plot centres around a true crime author Ellison (Ethan Hawke)  who is under pressure both financially and from the press to release a good book before his career goes down the toilet. He and his family  move to the country and buy a big old house. They start a new life in the house, as fate would have it is hiding some nasty little secrets. The hanging murder of a family in their backyard being one of them. Upon digging through the attic Ellison finds some stored footage from across the years depicting entire families getting slaughtered. Upon further investigation Ellison finds some childrens illustrations in the attic depicting the killings with a common thread featuring a “Mr. Boogie”

Who is this “Mr Boogie”? How is he linked to all these murders? The Answer is much stranger than just a standard run of the mill serial killer / slasher flick. With roots in ancient pagan mythology this goes a little deeper than the average murder story. But sadly I will have to leave it at that, and not give away much more than that as not to ruin your enjoyment of this film.  I will say that it is an enthralling watch and well worth any horror fans time to check it out.

Sinister has a genuinely creepy air  about it and does keep the suspense high. High impact ‘scare’ scenes expertly placed, and don’t seem corny. As a seasoned fan of the genre it takes a lot to genuinely creep me out, and I’m happy to say this film crept me out big time. The kind of creep out that can hit on the psychological level.  Sinister kept me right on the edge of my seat for the whole duration of the film! Well done guys!

If you can’t find the physical DVD its available on view on demand on you tube and if you’re going to pay to watch a film online this one is well worth it!