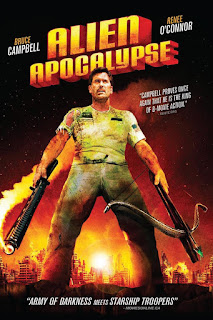 Alien Apocalypse is one of horror legend Bruce Campbell’s lesser known works. For a reason too. Its a Sci-Fi film firmly rooted in the B Grade Category. It isn’t a bad film perse but can’t tell if it was serious attempt at science fiction or a parody of the old alien films. Lets face it, the aliens look really cheap and fake.

The film centres around a small team of astronauts led by Dr. Hood (Campbell) who were sent on a 40 year space probe mission. Upon their return to Earth they find the planet taken over by insect like aliens. Again It’s not that bad a movie, actually it’s quite watchable. I have to say it does makes me wonder why Bruce Campbell agreed to be in the film. I’m sure he could have been doing better things. Even though he did seem to vanish for a while after Evil Dead 3.

Anyway, back to the film. After landing back on Earth the team find themselves promptly captured by the alien overlords that have since taken over Earth to harvest the planet for its wood. They intend to ship back their own planet (its apparantly rare on their planet to get wood). Hood and one of his team manage to escape the alien labour camp and flee to the hills. Out in the wild they meet a few of the last remaining free humans and hatch a plan to free Earth from the space insects.

Alien Apocalypse is far from being a masterpiece. aside from a few dumb moments and hammy acting, it’s actually quite watchable and the violence / gore factor is pretty low, so you can watch it with children who are partial to a bit of low level horror. I guess don’t expect miracles out of this film and you wont be disappointed.