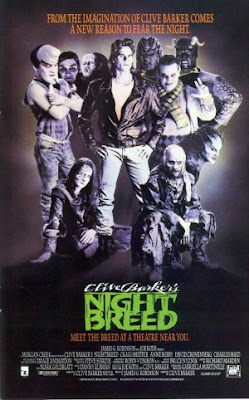 The plot within Nightbreed is a resonably complex one. It  focuses in on Boone, a young man who is experiencing what he thinks are delusional dreams about a mythical place called Midian. Boon then finds himself under the psychiatric care of Dr Decker. The vulnerable Boone is then heavily drugged and misled by his psychiatrist Decker into thinking he is responsible a series of murders that Decker (his psychiatrist) himself has committed. He is then institutionalised and meets a fellow inmate who shares his ‘delusions’.  Boon and his new friend venture into a cemetary called ‘Midian’ which is indeed hosting a clan of beings from an ancient race who shun the light and dwell in secrecy under the secluded cemetery. Boon is then bitten by one of the ‘nightbreed’ who inhabit the underground lair and given the gift of immortality.

This works out well for him. The psychiatrist who has stitched him up with the murder rap has him killed by the local police force. Boon then rises from the dead and flees the morgue to seek his own kind amongst the underground caverns of Midian. He is then attacked by Decker and the local police force. There’s a deeper subplot as well involving Boone and his girlfriend Lori. Lori tracks the ‘deceased but missing’ Boon from the morgue to the Cemetary and wants to be part of his world. It’s a fairly complex film and holds up to multiple viewings. You will find finer points of the story come to light as well with repeated viewings.

I understand Nightbreed didn’t do too well at the box office.  I think its a great film that flew below the radar so to speak. The creature effects are stunning the attention to detail is unbelievable. Except for a few instances the horror fx still hold up well even to today against the CGI which has taken over a lot of bigger budget movies. This is all practical effects (except for a couple of obvious exceptions) and serves to bring Clive Barkers magical underworld imagery to life rather well. The costumes, the imagry everything is pure eye candy for the horror fan. Barker creates a captivating atmosphere with plenty of fantasy and occult imagery to keep everyone enjoying this movie!

I would recommend it to anyone with an interest in horror, the occult, or more specifically Clive’s Claim to fame series “Hellraiser”. The “Nightbreed” in this film remind me a lot of the Cenobites and have similar captivating personalites of their own.

I was unable to find a watchable version of this on youtube. Nightbreed is well worth paying for though!  If you can  find it somewhere its worth  buying a physical copy!

Also be sure to check out Midnight Meat Train another Clive barker story put to film!