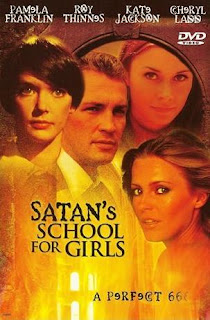 Satans School for girls is not too bad really. It’s an early effort from Aaron Spelling (who went on to do Beverly Hills 90210). I guess I expected something a little more in the exploitation genre with a title like that but after the initial disappointment it panned out to be a reasonably cool little watch. It has that old time horror / thriller feel which is pretty cool. While it has no real gore/horror factor its a decent way to pass a couple hours. I’d say its one you can watch with your non-horror minded friends, but I don’t think non-horror fans would dig this. I also think a lot of actual horror fans would find this slow paced.

The plot focuses in on Elizabeth who after finding her sister hanging as the result of an apparent suicide. Not convinced of the police reaction and findings of the case Elizabeth joins the “Salem  Academy” which her sister attended previously to find answers. Upon further investigation Elizabeth and their friends uncover tales of historical “Witch Hangings” and other mysterious goings on in the underbelly of the school. This further investigation leading to the discovery of a satanic cult under there.

This is not a hugely gripping watch. Its not a huge budget feature (I believe it was made for TV). It is, however something to do and worth watching once. It beats watching most shows on television if nothing else.

Interesting note, the film was remade in 2000 and starring Shannon Doherty and to be honest I find this a much easier watch. Not in the least part because I think miss Doherty is a babe. Tho not directed by Spelling it does have a very 90210 / The Craft type feel to it  but that just depends on your tastes I guess. The two movies do have a fair amount of differences in the plot so there’s probably no point going into too much detail about both films but they follow a central thread as outlined above.

Overall I think the 2000 remake of Satans School for Girls is a more entertaining watch. If you’re going to watch only one I’d personally choose the remake. I’ve listed both of them below which are available for streaming from youtube:

and the 2000 version:
for more great horror movie reviews be sure to check out https://www.gorenography.com