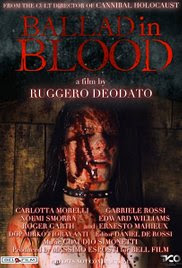 The plot is fairly simple. Through the haze of sexual decadence mentioned above, a young red haired girl turns up dead in the groups apartment.  No-one can remember how it happened until footage of the party shows up. The survivors of previous nights debauchery find the phone and computer of the deceased. They begin to recount the nights events and the painful realisations come back to haunt them bit by bit. A wild party that none of them can remember cuts in an out the friends trying to dispose of the body whilst coming to grips with what just happened.

As a film, Ballad in Blood is very well shot. It can be a bit disjointed if you’re not paying attention to when the film cuts in and out of past footage and current timelines. If you can deal with that its a hard hitting and unnerving watch on a few levels. I wouldn’t say it would go down as a classic of the horror genre by any stretch but more than worthy of a watch once.

Anyway you guys can judge for yourself:

for more great horror movies and reviews be sure to check out https://www.gorenography.com on a regular basis!