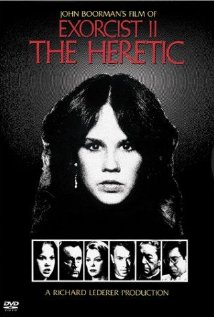 The Exorcist 2 had some massive shoes to fill after the legendary effort. The first film is universally regarded as one of the best horror films of all time. Sadly this one fell short. Well short. Not to say that it’s a bad film. It’s quite decent actually. It is just not the follow up that the first film deserved. It apparently copped a panning at the hands of critics at the time and to be honest I never even bothered watching it. Until now. It also failed miserably at the box office. After years of wondering what ever became of young Reagan who got possessed by a demon I finally got my chance to find out.

Young Reagan has now grown into an attracive young woman / teenager. By repressing memories, she has put the unpleasant incidents of the first possession behind her. Reagan is undergoing counselling and in an effort to understand the possession and the death of the priest, father Marrin that exorcised her in the first film. A new priest, father Lamont (also a friend of the deceased priest father Marrin) wants to question Reagan on the events surrounding the death. Her psychologist thinks recollecting the incidents would be too traumatic so she suggests Reagan undergoes a hypnotic treatment. This however re-awakens the demon Pazuzu (who possessed her in the first film).

While the subject matter of The Exorcist 2 really appeals to me, I find the movie watches like a TV special. Its cool enough for what it is. It’s definitely not the successor the first movie demanded. Someone needed to come in and hit this movie out of the park, so to speak. Some shit-house special effects really serve to cheapen it too.

One thing I really did like about the movie is that it expanded on the demon Pazuzu that took control of young Reagan in the first film. If you have a deeper interest in religion and demonology this could be of great interest to you. If not , there’s a bit less to keeep you interested. There are many aspects of this film which would appeal to those interested in religious history and they are little details. If not watched closely, those details would be missed. If you don’t have any real interest in religious history / mythology I’m not sure this movie would serve any purpose other than answering the question “I wonder what happened to that girl from the Exorcist”?

Overall, not a bad watch. I feel the panning it got was due to the high expectations from the first film. It really did need to do better and could have kept the franchise in the mainstream if it was. if you can put that out of your head, this is a decent watch.

for more great movie reviews and other stuff be sure to keep  checking https://www.gorenography.com on a regular basis!