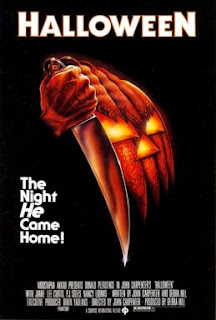 Halloween is one of my all time favourate films. It’s not just me either. The horror world in general applaud this film as one of the all time classics of horror. It was shot in 1978 by John Carpenter (on a slim budget of $300,000 I understand) and grossed over 70 million worldwide. It’s no wonder either, It’s a captivating tale. It is brilliantly shot and produced by Mr Carpenter. As a slasher / horror / suspense flick it keeps the viewer engrossed and on the edge of their seat the whole way through this experience. It is essentially the ultimate slasher flick.

I’m sure I’m going over familiar ground with most horror fans in detailing the plot. Here goes anyway, it focus’ in on Mike Myers who brutally stabbed his sister to death as a child and was subsequently institutionalised for the following 15 years. He is then scheduled for a court appearance at age 21 (I assume) to assess whether he should be let out into the world. Of course Michael somehow escapes (I’m not sure how he got out and I will concede this to me seems to be a bit of a plot hole) to return to his home town of Haddonfield where he starts preying on the teenagers of the town.

Stylistically, Halloween follows on from Alfred Hitchcock’s Psycho in many ways. This is the next generation of slasher flick with actual blood and some level of gore. It’s by no means extreme, but it’s a film that can cross over into the realms of non-horror fans quite well. Main star Jamie Lee Curtis (who oddly enough is the daughter of Janet Leigh of Psycho fame) as Laurie is stunningly beautiful and everyone in the film holds their ends up well meaning the film is believable and immensely watchable.

I have to give props out to director John Carpenter and his unique method of filming. His films always seem to be brilliantly executed and captivating from start to finish. I can’t say enough good things about this film except that if you haven’t watched it, go watch it now! Halloween is a must for any horror collection. If you don’t own it, buy it! If you haven’t seen it in a while chuck it on again and relive the magic!

This is the film that established Carpenter as both a legendary film maker and an equally legendary composer. Carpenter was responsible for the musical score behind this film as well. Halloween as a film is widely regarded as the forefather of the slasher film genre. As well as all this it has spawned 8 sequels (and two Rob Zombie sequels) and is probably the most successful of all horror franchises ever if you adjust the takings over time to todays equivalent dollars. Carpenters legacy is legendary and this is the film that put him firmly on top of the pile!

For more great John Carpenter Films be sure to check out the following:

Haloween 3.
In the Mouth of Madness.
Ghosts of Mars.

For more great horror movie reviews and stuff be sure to check out https://www.gorenography.com on a regular basis!