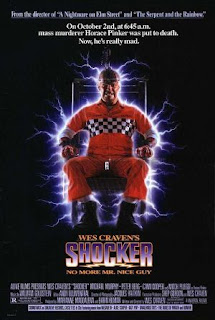 Directed in 1989 you know anything with Wes Craven as director is going to be a pretty solid film. Shocker is no exception.

Violent killer Horace Pinker has been terrorising the town for a while now and nobody can get a lead on who he is. No-one except high school football player Jonathon who after a series of on field head blows develops an ability (maybe a psychic dream connection) to meet the killer in his dreams. In those dreams he retrospectively witnesses the brutal murder of his own family. Jonathon’s dream connection to the serial killer allows him to lead the police to Horace and have him captured (in spectacularly violent fashion) and eventually put to the chair.

The main problems is that true movie evil like Horace doesn’t die. After a black magic ritual conducted in his cell before his execution, neither does Horace’s spirit. As a result Horace’s spirit is able to continue inflicting his atrocities in a more supernatural fashion after the death of his body. Horace begins possessing the bodies of still living to hunt down Jonathon. There’s a little more to the plot than that but I’ll leave a few surprises for the viewer. Overall its a really cool flick and the attention to detail is pretty good. I especially liked the way that the hosts infected by Horace have the same gimpy leg that Horace does.

Shocker has a similar feel to another Wes Craven movie, “A Nightmare on Elm St”. In many regards and I’d say it would appeal to a similar crowd.  The movie has a deliciously 80’s hard rock / heavy metal soundtrack featuring Megadeth, Iggy Pop, and “The dudes of Wrath” featuring hard rock icons Tommy Lee, Paul Stanley, Rudy Szarzo and Vivian Campbell which provided a huge bonus for an old metal head like myself!

For more great movies and reviews be sure to check out https://www.gorenography.com