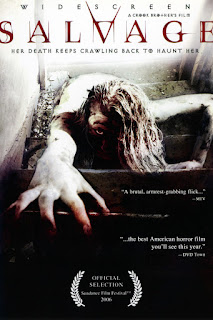 Hmmm? Luck was not on my side at the flea market today when I bought Salvage (also known as Gruesome). Luckily it didn’t cost me much at all. Initially attracted to the cover and the title of “Gruesome / Salvage” I held high hopes for a splatter fest of epic proportions. How wrong I was. I had a friend over on first attempt to watch it and I have to say it was pretty painful and the movie didn’t seem to go anywhere. He requested I turn it off after which it almost went into the bin. We decided to  watch reality TV cooking shows instead. :/ not a good sign.

One good thing about the film is that the main starlet is fairly cute in that ‘girl next door’ kind of way (she reminds me of Marcia from the Brady Bunch a bit) . It was in fact the only thing that kept us watching as long as we did.

The film appears to be about a girl who is experiencing lucid nightmares about a guy who is trying to kill her. In those dreams he manages to catch her again and again as she relives her own horrifying death. The premise of the movie is pretty cool actually and has some definite potential but I have to say it is poorly executed. I don’t believe we even got half way through it.

On subsequent research the next day it seems that the movie had been getting half decent (but far from good) reviews in some of the other online sources such as wikipedia and imdb (where it is also known as “Salvage”) so I decided to give it another shot and see how it went. for what its worth I do see some small amount of  merit in it. Especially since finding out the whole movie only cost $25000 to produce. Sadly on second viewing I fell asleep and woke up in time to see the ending. It just didn’t do it for me.

I won’t be trying for a third time. Gruesome / Salvage is recommended only for those who are bored out of their skulls basically best left as a last resort. There has to be something else to watch. Pretty much anything.

for more great movie reviews be sure to check out https://www.gorenography.com.