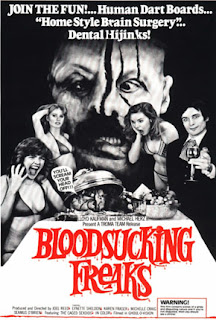 Was this film intended to just push the boundaries of censorship or provide something more? Id say its nothing more than a gore fest but it does do that well. It seems to have mostly negative reviews on the internet but seems to have gained a huge cult following. I actually didn’t mind it and found myself watching it fairly intently until the end.

Plot wise it centres around the circus director / S and M master Sardhu who is running an underground live show. The show is attracting crowds and features nudity and torture which the audience think is fake. Unknowingly the punters are watching people get tortured and killed right in front of them.

Sardhu is seeking artistic recognition for his shows. One rather vocal critic in particular thinks the show is purile garbage (and rightly so). Sardhu of course captures him and totures him along with the many females (who of course have no clothes on) he has stored away in his dungeons under the theatre. While most of the females are fairly anonymous he does capture one beautiful ballerina who is missed by both her boyfriend and a private investigator who start poking around the macabre theatre. Needless to say this is where I’ll stop divulging the plot and let you guys see how it ends for yourself.

Gore wise Bloodsucking Freaks would have set new standards for offensive-ness and outright crudeness. Be thankful it was done on B grade 1976 technology. It was pointed out to me that the gore did look more full on when played on  VHS player so maybe the high def digital version does expose a few flaws in the rather primitive gore effects.  The gore does look a little like red paint if you know what I mean. I shudder to think how grim this film would be if it was remade today. This one was banned in more countries than it was allowed to be shown in. I think it would still cause a huge stir today if it was remade or suddenly crept out of the underground circuit.

Anyway I think it was a cool watch but definitely not for those who are new to the horror scene or offended by female nudity (or today’s sensibilities in regards to sexism) so don’t watch it around your Mom! Anyone you don’t know for that matter.

for more great horror movie reviews be sure to check out https://www.gorenography.com regularly!