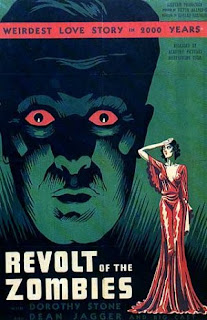 I hear Revolt of the Zombies is supposed to be a loosely based sequel for seminal zombie film White Zombie. Directed by Victor Halperin (who directed White Zombie) it does seem to follow on after that first film. Chronologically at least.

Reports are filtering back to the Allied forces in French-Austria that there were in fact zombies in Angkor (in the orient) which starts a military expedition to find and destroy the secret zombies. An attempt to extract information about the zombies from a priest they had previously captured  from the Orient fails, rasing fears the Zombies could be used against the allied forces.

There’s a subplot around Claire. She is part of the expedition, and falls in love with Cliff (after they’ve been in the orient a few months or so). Cliff has not been forward enough in asking Claire to marry him so she accepts a marriage proposal from Armand to make Cliff jealous. The plan works and she ends up marrying Cliff after he finally confesses his love for her. It’s all a little hammy in that 1930’s kind of way.  After that’s all out of the way its starts to get a little more interesting and the movie moves along a little faster.

Not to be defeated in love or life Armand persists and unlocks the secret of enslaving the unwitting into zombie-hood to do his bidding. He eventually creates an army of zombies (one should remember that the zombies in these early films are not the decaying flesh eating creatures made popular in movies like the Night of the Living Dead etc. Rather they are more slaves of will in a state of hypnosis like trance). Armand threatens to turn Cliff into a zombie like he as done to everyone else unless Claire agrees to marry him in exchange for Cliff being left unharmed.

Without giving away the plot I will say the ending left me a  little underwhelmed. Over all its a decent enough (but not spectacular) watch. It is interesting from an historical point of view as well. I will say that the passing of time  and events in the film can be  a little unclear as well, which makes what is an otherwise pretty cool story a little disjointed.

Obviously being shot in 1936, Revolt of the Zombies is a black and white film. The audio to the movie has that scratchy feel to  it as well. I know that many people don’t like to watch black and white cinema but if you can get past that its a fairly decent watch. I don’t think it comes up that well against White Zombie though. It’s a fairly reasonable watch. Like Most B&W films it does rely on dialogue, and a decent story line.  Lets face it the special effects and gore were non-existent back then. So don’t expect anything to mindblowing. This movie had to stand or fall based on its own merits.

Be sure to check out the original White Zombie Movie as well!

For more great horror movie reviews and other stuff be sure to check out https://www.gorenography.com.