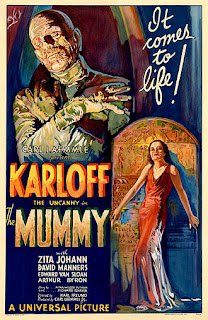 I thought it was time to fire up the old VHS player and give The Mummy a spin. These old VHS tapes do have a certain charm. It’s strange to think some guy probably paid a lot of money for this back in the day (as indeed I did too back in the 90’s). Now I find myself  having to sift through a couple hundred of them which I got for next to nothing.

This one was kind of a treasure. With child like enthusiasm I fed it into the “state of the art” 6 head, Hifi VCR and went back to the couch to absorb this film in all its grainy, black and white, VHS glory.

Realistically this film is obviously dated.  I think its an interesting watch. The story and plot line holds interest and the dialogue is excellent. As a child of the 80’s glory days of horror its hard to go back and put myself into the mind of someone watching this in the 1930’s would this film have frightened audiences back in the day? Hard to say. There’s some chilling dialogue but overall its an easy watch.

The film revolves around a group of archaeologists who unearth the mummy of the Egyptian Phaoroh, Imhotep. (In much the same way I unearthed these VHS tapes) and inadvertently resurrect him by reading out from the ancient scroll of Thoth. Played by horror legend Boris Karloff the mummy returns as an Egyptian character named Ardeth (spelling???)  instructing the archaeologists on where to find the treasures of Imhotep’s tomb. My only real criticism of the film is that its hard to follow how the Mummy came back as the Egyptian Ardeth and why the scientists would even listen to him in the first place. Regardless the Mummy is set on finding his long lost lady love from Ancient Egypt whom he believes has been re-incarnated as a modern woman.

Overall The Mummy is a cool watch. I have to admit I have a soft spot for this stuff. Many others don’t.  If you don’t like this stuff it can be tedious. If you do this is one of the better of the golden era of horror. It has what can only be described as an old world charm that only these vintage era horror films can have. I enjoyed it and I’ll definitely put it on again! Plus the VHS looks good on my bookshelf!

For more great horror viewing be sure to check out https://www.gorenography.com .