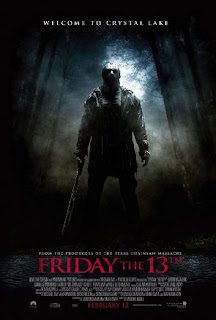 Producer Michael Bay (despite being a big time Hollywood guy) was always going to have a huge task ahead of him remaking one of the greatest horror films of all time in the Friday 13th 2009 remake. He didn’t do a particulary bad job of it. It’s just that remaking the first film for anyone who’s seen it would be a pointless affair as the plot relied on the major twist at the end (you know what I mean). Re-watching another version of it when you already know the ending just wouldn’t have any effect.

With that said the film moves fairly fast through the territory covered by the first film and then the second and seems to land somewhere in the territory covered by the third film. It’s here it spends the rest of the film as a standard slasher film. In retrospect this was a good move. It starts to heat up from the point where Jason dons the hockey mask for the first time and the classic representation of Jason Vorhees is now able to be used.  Lets face it, this is the way most people (except hardcore afficionado’s) will remember Jason. Plus, it really does up the commercial appeal of the project.

As a slasher flick its pretty reasonable actually. The horror effects are great and the acting is good enough (Not great) to get it over the line. It’s actually not a bad flick at all. Inevitably the question will be asked ‘How does it compare to the original?’ and it doesn’t. The original is one of the greatest horror movies of all time and this is what I’d call a medium / solid slasher flick at best. It’s definitely worth a watch and I’d take a punt it would be aimed at the younger horror fans who maybe wouldn’t be inclined to watch the original series of films. It could however, fire them to go back and watch the original films which I could totally see it doing.

The Friday 13th 2009 Remake has an easy to follow plot, lots of topless babes, and some righteous killings. It’s easy to follow  if you’re having a few drinks or watching it with friends.

Be sure to check out our review of the original film here FRIDAY 13th FILM REVIEW.