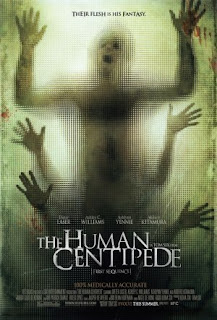 I used to watch a lot of horror movies as a kid (some would say too much).  So much so that I actually overdosed on gore flicks. As a result I didn’t really watch or have much interest in any of them to watch for almost 10 years. That is until I heard about the Human Centipede. I have to say it was the controversy that piqued my interest in it really. I mean what could be so bad about this movie that it had everyone in internet land vomiting into their own  mouths ?

It follows the plight of two rather attractive females and some Japenese guy who unwittingly fall into the trap of a sadistic doctor. This doctor sedates the subjects and prepares them for his perverted medical experiments.  The three are subjected to humiliation degradation on and torture beyond the comprehension of most humans when they are placed into a human centipede joined together from mouth to anus, the three of them connected by the same digestive tract. The gore is high impact stuff too and the “feed her” scene is one of the most harrowing displays of human suffering ever committed to film.

Obviously the Human Centipede is not for the faint hearted. There are some films that can’t be unseen once you’ve watched them and this is one of them. As a movie it is captivating. It’s well thought out and compelling. The viewer actually feels for the victims and the cold bloodiness of Dr. Heiter (the Surgeon played by Deiter Laser) is delivered disturbingly well. Almost too well. I don’t think I’d trust this actor if I met him in real life. I don’t think many people could say its a bad film, its just too much for many people to take.

It’s a tough one to talk about without ruining the film but I’ll include the trailer here so you can judge for yourself if its something you want to see. Be warned this is not for the faint of heart!

Also one word of advice if you find this one too heavy going, do not attempt to watch Part 2, or part 3.

For more great horror movies be sure to check out https://www.gorenography.com.

Also be sure to check out Human Centipede 3.