Witches / Dunwich Horror is either a remake or an adaptation of the HP Lovecraft tale “The Dunwich Horror made into movie. Depending on how you look at it I guess. I stumbled upon this film by accident at my local flea market and it fell to the bottom of my “movies to watch” pile. It wasn’t until months later I picked up and put it in the player. Upon reading the back of the DVD cover realised the connection to Lovecraft. Now I wish I’d watched it as soon as I bought it.

To be fair my copy was called ‘Witches’ not the “Dunwich Horror” from which it is based. The dual names thing really annoys me. It makes it hard to follow which films I’m buying. As a collector it’s been a minor thorn in my side.

I make no secret of the fact I love HP Lovecraft’s work, and as a young adult have read everything of his I’ve been able to get my hands on. As far as I can remember this seems to follow the story well and do it great justice.

Long time HP Lovecraft slave of the Ancient Ones, Jeff Combs is 20 or so years older than the last time I saw him in the “Re-animator” films but man it was great to see him back in action. The ladies are looking sexy, tasteful and elegant (great to see after all the exploitation horror I’ve been watching of late). The connection is made rather well with the Chtulhu Mythos and the universe  Lovecraft created. Some rather genuine readings of the incantations from the Necronomicon permeate the film. The use of the symbols (sigils) used in the hallowed tome across the opening credits (and in film) give it that arcane feel. This while not important to the plot adds a real air of authenticity to proceedings.  Everything felt natural. It felt the director himself was a fan of Lovecraft.

The plot of Witches / Dunwich Horror is rather complicated.  A quick synopsis is that some young lady gives birth to a child in what I recall from the Lovecraft story to be the mythical New England the town of Dunwich. She of course is destined to open the cosmic  gates through her offspring family tree of freaks most of which are human and one of which is an earthly incarnation of the ancient god “Yog Sagoth”. The “Old Ones’ are a race of Ancient Deity from beyond the stars who will bring about the end of the world. The only way to stop the Old Ones from entering our dimension is to find a complete copy of the fabled book THE NECRONOMICON which contain the incantations to open and close the inter-dimensional gates.

The movie itself is complex and not one to watch dipping in an out or in a situation where one is easily distracted. It does require concentration but the results are well worth it. A fantastic tale of occult supernatural horror which stimulates the mind and fires up the imagination like few other story tellers can. Overall, I enjoyed it immensely. I can only recommend you guys find a copy of this and watch it yourselves.

From Beyond.  The Void.  Bleeders/Hemoglobin.  In the Mouth of Madness.  Re-Animator.   The Call of Cthulhu.

For more great horror movie news and reviews check back at https://www.gorenography.com regularly! 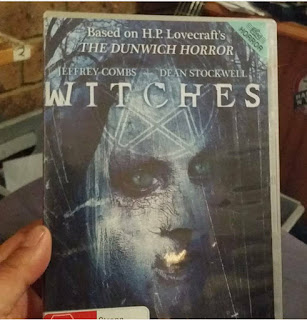