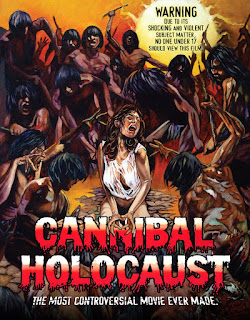 Cannibal Holocaust the now legendary icon of cinematic gore, was originally released in 1980 or sometime around then. This movie was from what I hear banned in more places than it was allowed to be shown. I have to say it’s one of the more extreme films ever created. In terms of gore and violence for both its time and even now, it still manages to curdle the blood.

Based on the story of a group of journalists who have aquired footage of collegues who have gone missing in the south american jungle. they too venture in after their collegues to research the indigenous tribes and figure out what happened to their friends. They end up making complete assholes of themselves instead and incur the anger of the local cannibal population.

There has been some speculation as to whether or not gore scenes in this film are real and Italian director Ruggero Deodato even got arrested on obscenity charges. He was later released upon further investigation. Either way the budget filming techniques and realistic violence and sadism really to make this one seem pretty realistic. Sadism and cruelty abound. This is not one for the faint hearted as scenes of real animal violence and some graphic rape scenes really push the boundaries.

Different people will have different opinions on Cannibal Holocaust. If you’re a horror fan its worth watching. I don’t think its the most out standing film ever. By the time the film is done you’re left feeling almost beaten up and worn out. It has some interesting social commentary as well on the how far civilised man has or hasn’t progressed.