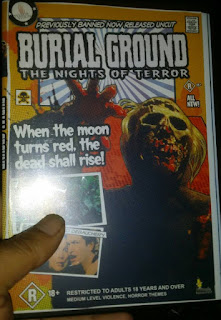 Burial Ground (Also known as “The Nights of Terror) is really just a bit of zombie silliness. The plot revolves around an historian that unearths an old burial site. Of course the inhabitants of said burial site come back to life to feed on human flesh. There’s not a lot more to it than that. It’s shot in a very budget fashion almost assuming a straight to VHS release  but despite its genericisms is really quite a fun watch especially if you’re not really in the mood for anything too cerebral.

Condsidering the time of release of this bad boy it would have been quite extreme gore for the time. With dawn of the dead setting the previous benchmark for zombie horror this one along with Zombie Holocaust was part of the wave of ultra violent horror coming out of Italy at the time. Whilst its a rather budget affair it does have some great gore effects for the time, and that creepy synth / moog soundtrack that cold only come from the late 70’s / early 80’s really sets the scene. The zombies themselves look great, rather than the recently deceased corpses seen in most zombie flicks these are much more advanced in decay and riddled with maggots which makes for some great horror ‘eye candy’ which makes sense if they are supposed to be from an old burial ground.

Overall I quite enjoyed Burial Ground (apart from one very puzzling attemepted incest scene/ which made sense later on…. ) it and it while it was nothing groundbreaking I’m quite happy to have this one as part of my collection.

For more great horror movie reviews be sure to check out https://www.gorenography.com regularly!