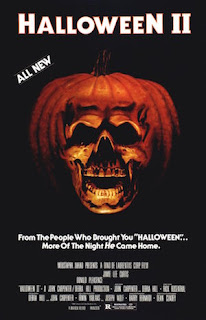 Tis the season! With Halloween approaching, I thought I’d celebrate by watching the 2nd instalment in one of the greatest horror movie franchises ever. Halloween 2. Obviously by virtue of the fact there is a part 2 the story of  escaped mental patient Michael Myers is not over. Previously thought at the end of the first film it Seems Michael is virtually indestructable. Set in the immediate aftermath of the first film Michael survives a barrage of six bullets and resumes his killing spree around the town of Haddonfield.

One quite nasty killing involving a particularly attractive (and topless) nurse left me a little sad. It’s always a shame when a lady with knockers like that gets killed too early in the film. In all seriousness though, while the plot is not particularly involved the movie is well shot and I really can’t see anyone not liking this film. The action and the killings are a little more full on than the first film and definitely pack more impact than the original.

Over all Halloween 2 is a pretty cool film. More importantly a very worthy sequel. Nothing could really top the original this one keeps the viewers interest though out the whole movie. It’s more of a simple watch with  straight forward plot, and great fun to watch!

For more great movie reviews be sure to check out https://www.gorenography.com on a regular basis.

Other movies in the Halloween series