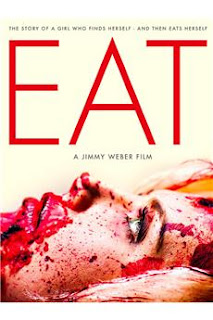 Well then. Eat is certainly a different take on the horror genre. It exists somewhere between a drama and horror flick (with some moments of extreme gore). This is a very interesting watch indeed. Even if you don’t particularly like it you have to admit, it’s unique.

The film itself focus in on a young lady, Novella who is trying to make it in the world of acting. Novella has just hit her 30’s, hasn’t had a role in years and has run out of money. She’s now at the point of eviction.  Basically life is slipping out of the grip of miss Novella at a rapid rate. Stress takes its hold and she develops a nervous habit of chewing at herself. It then progresses to actually eating herself.

As I mentioned above the movie is more like a drama, but obviously dealing with the subject matter the film has plenty of moments of what I’d call reasonably extreme gore. This isn’t for the faint hearted or the new comer to horror genre. The horror effects are very well done and the movie is shot in very high resolution so it has a particularly hard impact on the viewer as well.

It’s safe to assume Eat was done on a tight budget, but its still a riveting watch. It held my attention for the whole of the film. The way the story develops, it’s actually quite a believable story. The viewer really feels for Novella, even though many of her own life choices have led her to this point in her life. I wouldn’t call this film a classic of the horror genre but it is a fresh and fairly unique take on the genre. Definitely something worth you horror fans checking out at least once.

Be sure to check out https://www.gorenography.com regularly for more reviews and horror related stuff!