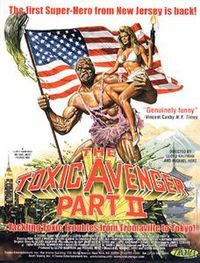 Too tired to think this weekend. After a heavy week at work I was looking for something that did not require too much in the way of thinking. The Toxic Avenger 2 was just the ticket.

This one picks  up after the first movie finished. The Toxic Avenger’s (Toxie) home town of Tromaville is peaceful and uneventful after the toxic avenger has cleaned up all the crime and corruption. Painfully quiet. So quiet that Toxie gets a job in a nursing home for the blind to pass the time.

Meanwhile, a new group of criminals called “Apocalypse Inc” decide to blow up the nursing home (to kill toxie). Of course the Toxic Avenger is much harder to kill than they anticipate. He systematically and rather violently (and hilariously) takes care of the criminals sending them fleeing back to their base, and regrouping to come up with a plan to destroy the toxic avenger under the guise of sending him to find out about his father. This of course leads him to Japan on a journey of self discovery. As deep as all this sounds, its all stupid shit really. It’s hammy as all hell, and will result in a few retarded chuckles from the viewer.

Once again The Toxic Avenger 2 is like the first one. Ultra tasteless B grade crap. Also watchable in the exact same way as the original. I’m not going to say this instalment is any better than the first, really its more of the same. If you liked the first one you’ll know what you’re in for,  90 minutes of slapstick gore. It will have less intellect than the average saturday morning cartoon.  But if you’re coming back for part 2, you would already know what you’re in for. You have no one to blame but yourself.

Over all I have to say I did enjoy this, and I would go so far to say its one of the better Troma Films (they really do pump out some crap). Anyway its been loaded up on you tube for your enjoyment or self torture which ever way you look at it

Be sure to check out more ace horror movie reviews on https://www.gorenography.com