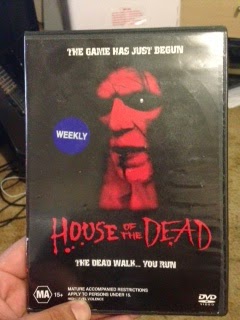 Hmmm. don’t know what to say about House of the Dead. I was a fan of the video game back in the 90’s/2000’s. Logic would suggest that the plot would have all been laid out nice and neatly for this to become a solid B grade gore flick. The potential for lots of gore, zombies, guns and well a creepy old house.

THE “PLOT” OF HOUSE OF THE DEAD

There is some level of plot I guess. Some teenagers go attend a rave on an island. They find themselves under attack from zombies. They eventually make to the house about 55 mins into the film. So at least now the title of the film is not made redundant.

THE VERDICT ON HOUSE OF THE DEAD

Normally I’d deliver a verdict on a film. This time round it just reads as a list of complaints. Not only did to fail to hit the B Grade mark, in my books this is a solid contender for one of the worst films of all time. Medicore plot and crappy acting from the start turned me off this one. Luckily none of the actors were known. This would have killed their careers on the spot.

When the action finally did happen a lot of the zombie shots looked really rubber and fake. Lets just say the graphics in the game that preceded it by 10 years looked better. I don’t know what kind of budget the production team were working with but they really needed to put more work into this. The zombie flicks coming out of Italy 25 years before this were infinitely more convincing.

The movie itself. The dialogue was hammy as all hell. The frequent boob shots couldn’t even keep me awake to see the end of this flick. The flashbacks to the game were just annoying. There are some truly epic plot holes. Why was it so bad? With the way the video game kicked ass in the 90’s there was a guaranteed audience for this. All they had to do was put a little time, effort and money into this and we could have had a winner (see Resident Evil as exhibit A). This is seriously of a standard that high school students might put out.

I believe it got a 3% approval on Rotten Tomatoes website.

Some further investigation revealed this movie did have some money spent on it. $12 million in fact. Where did the money go? I also found out this movie was directed by Uwe Boll. Boll was also known for releasing absolute stinkers, with the exception of Bloodrayne -which wasn’t too bad.

Apparantly  in Germany there was an investment incentive that movies that made a loss would be reimbursed by their government. 50% I believe. Mr. Boll took full advantage of this tax shelter on his movies up until the loophole was closed in 2006.  I can’t help but wonder if it was the crappyness of this movie that prompted the re-think of that tax law.

Uwe Bolls movies have angered many people. His films are so bad there was even a petition to retire posted on a website then known as Petitiononline.com. He has also won numerous “worst director” type awards.

The video is still on You Tube Check it out HERE.

*It would appear that I’m not the only one that felt this movie was a stinker, so epic it could clog your toilet… It turns out the director has gone back and edited the movie again and taken the piss out of himself and well… even though the funny version is still sub par as a movie, it is far superior to this one…”

Anyway if you want to check out the funny version of House of the Dead feel free to look it up here.