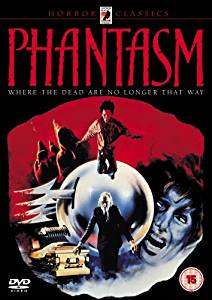 Phantasm is certainly a strange bit of cinema. Not to say its bad, in fact I quite enjoyed it.  It centres on a family that have lost both their parents. Later on a the oldest of three brothers is murdered in strange circumstances.

Michael, the youngest of the brothers watches his older brothers funeral from afar. He notices something strange going on. Namely the creepy undertaker lifting the casket by himself and hauling it off in his hearse. On further investigation into the undertakers mausoleum things start to get even creepier. He gets his older brother and friend involved in looking further into what’s going on. Michael uncovers a strange plot involving the use of the deceased bodies. Without spoiling the film for the reader the movie takes a turn to the decidedly supernatural.

The film really descends into the realms of strangeness and I have to say the plot is at times disjointed and hard to follow. It is rather well shot in that way that really brings out the colours and vivid detail in the cinematography. One thing I  will say is that the music in this film sets the mood there’s one creepy piece that gets played over and over that I think brings it all together. (I was trying to figure out where I’d head this and I’m sure it was used by Swedish death metal band Entombed.)

Phantasm is one of those films that needs more than one viewing so I will no doubt watch it again later and repvamp this review accordingly. I’d give it a thumbs up and recommend that pretty much anyone into horror would like this film.