I was wondering to myself for a while now, how Human Centipede 3 could get even sicker than the first two milestones of cinematic depravity that preceded it. I wonder no more. 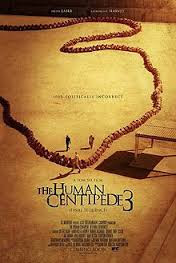 Human Centipede 3 sees the return of Dieter Laser and Laurence Harvey the protagonists from HC 1 and 2 as warden and accountant of an American prison. Without giving away too much on here, director Tom Six delivers some servings of sick black humor. The sadism and a lot of “in-house jokes” building from the first 2 films are present. Dieter Laser plays the part of the sick and twisted prison warden all too well. Disturbingly well it must be said. His dialogue is mostly yelled throughout the film and keeps the viewer on edge and rattled throughout the film. I should say I found this aspect of the film rather annoying. Laurence Harvey plays a subservient accountant who comes up with the idea for the worlds first Human Prison Centipede. His character is different, but still disturbingly similar to that which played in part 2.

Is it as sick as parts 1 or 2? Hard to say, in respect to pure gore, I’d have to say “no”. In terms of sadistic perversity I would say its right up there, I guess it depends on what offends you.

Some Horror sequels leave the viewer with the sense they’re watching the same flick over and over again. These three flicks, although linked have distinctive feels and shooting styles and identities. It keeps everything fresh and interesting (In grim contrast to the subject matter). Its also good to see the creative team can poke fun at themselves throughout the film too.

Over all its pretty cool. I’m still deciding where I’d place it in regards to the first two instalments.  I’m happy they just didn’t rehash the same film over again like many movie franchises seem to do.

If you liked the first two films, this is definitely worth seeing. If not, stay away. Stay well away. There is no need to traumatise yourself again.

For more great reviews make sure you check back here regularly at https://www.gorenography.com .