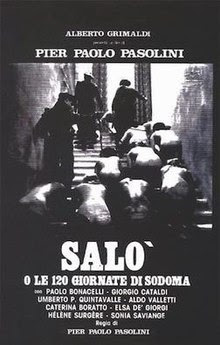 Based loosely on the Marquis De Sade’s book 120 Day of Sodom. This is, I guess an adaptation of that book but set in 1949 under Mussolini’s rule of Italy.

The question remains, is this really a horror film? Hard to say, it’s definitely horrifying. The film is littered with unspeakable acts horror from start to finish. All manner of tortures abound in this film.  This is more of an ‘arty’ independant film, but for amount of torture in it… I’ll go with horror. This film itself outlines the cruelty inflicted on a bunch of teenagers kidnapped, tortured and molested for months by ruling members of the Italian aristocratic set, or ”libertines” as they are referred to. It is sick, depraved and filthy. In fact it is the only film I’ve not been able to watch in one sitting due to the cruelty and sexual sadism inflicted on said teenagers. Including acts as branding, rape, coprophilia and much more.

Salo was widely praised by film critics in its time but even more widely banned by the world at large. Oddly enough the director Pasolini was murdered a few months before its release. It is available now on DVD/BR but I’d assume it would take some work to find it. Be warned though, it’s a hard one to watch. A litany of human perversion and sadism if you will.

This film does raise the question on whether there are there films that just don’t need to be made? Is this film just sadistic filth? Or a film with artistic merit that needed to be made??? Personally I’d be leaning on the side of filth but its a free world. It leaves me with a sick feeling that I’ve seen something that should not have been seen. In a rare show of good taste I’m not going to show a link or preview for the film. Make sure you check out the preview before you decide to watch the entire film. If you dare that is.