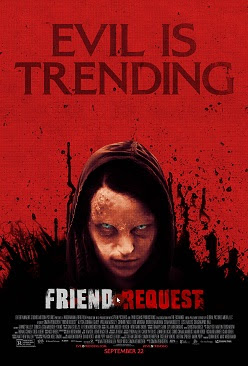 Friend Request is an interesting one for many reasons (also not to be confused with another film called “unfriended”). As a film its well made and rather watchable so no issues with the entertainment value of the film. Another darker more sinister reason that it touches the watcher is that it exploits a medium that nearly all of us use, Facebook. Social media in general really.

The film revolves around Laura who seems to be generally winning at life and doing well at school. She’s good looking, has a wide circle of friends both online and offline. Laura ends up accepting a friend request from a strange loner, Marina she knows from university.

Their new found “friendship” develops into obsession for the new friend. Soon its clear that she’s mentally unbalanced and Laura wonders how she can get rid of Marina without it backfiring on her. Of course Marina takes the rejection harshly and kills herself which she records and sends it onto Laura via facebook.

This is where things start getting weird. A wave of suicides happen at the school and although Marina is dead someone hacks the facebook accounts of Laura and her flatmates and posts the grizzly deaths onto their social media accounts as a revenge. Laura’s friend count starts to tumble as people see the morbid videos posted to her timeline and online as well as in real life. Laura finds herself and her friends being stalked from beyond the cyber graveyard by Marina.

Overall I have to say I quite liked Friend Request. I wouldn’t say it’s a classic, but its a solid and engrossing watch. Friend Request kept my interest the whole way through. While it does have its fair share of killings and blood the film sits fairly firmly in the thriller category. As a film it should have an almost universal appeal to users of the internet and social media.

If you liked this review feel free to check out more of them at https://www.gorenography.com