After the general failure of the Exorcist 2  (It wasn’t terrible, it just wasn’t that good) I held minimal hopes for Exorcist The Beginning. Upon loading this bad boy up I was greeted with the opening scene of a priest amidst a back drop of crusaders crucified upside down. I knew right from the onset this one would be good. 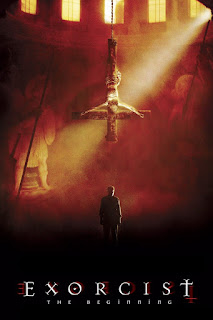 Exorcist The Beginning is set a few years after the Nazi occupation. Lets say around 1950.  25 years or so before the events of the original Exorcist film. A much younger father Merrin has lost faith in God and left the priest hood. He has embarked on an archaeological dig in Africa to figure out what’s going on with an unknown church that has been discovered. He settles in with the locals both a priest, Father Francis, the local Africans and tribesman. Merrin even strikes up a friendship with a pretty young archaeologist, Sarah.

Things start to get weird around the camp when he is able to enter the church. A church which appears to be a shrine to Lucifer the fallen angel. Nobody around town knows who built the church. Father Merrin works out it is built on the spot where the rebel angels are said to have fallen to Earth after the battle that got them kicked out of heaven.  Instead of leaving it alone (like the natives suggested) curiosity gets the better of them. Of course  they unwittingly unleash an ancient evil upon the camp and unsuspecting victims.  Father Merrin is called upon to use the ancient roman ritual of the Exorcism to sort this mess out.

This is where I have to commend the creatives behind this film. For those into the occult or religious studies this follows the mythology of lucifers’ fall from the heavens and the warrior angels who rebelled against God quite well. The religious (and anti religious) symbolism is used excellently throughout the film and really adds an atmosphere of the arcane to proceedings.

I wont go so far as to say Exorcist the Beginning is as good as the original Exorcist film. It is, however a worthy sequel (unlike Exorcist 2). It lends an interesting background to the origins of both Fr. Merrin and the evil entity, Pazuzu that possesses Reagan in the first film. It more than makes up for the lack lustre second part. I found this film kept my interest the whole way through the film. It was a gripping watch that stimulated me intellectually as well.

This film is very well made and executed. The plot makes you believe. The acting plot and story line of the film all hold water. There’s  nothing I can fault this film on.

Be sure to check out the other instalments in this series:

For more great horror movies be sure to check out https://www.gorenography.com .