Autopsy was not a bad little surprise. Another of my chance findings in a second hand shop. I was not holding out huge hopes for this one but it delivered the goods quite well! 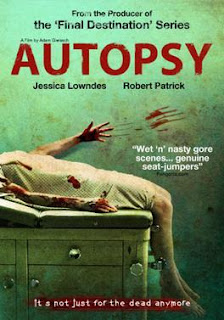 Basically the plot centres around a group of 5 teenagers who are driving through a poorly lit forest and get into an accident. To make things worse somehow they’ve hit and badly injured an innocent man in the process. After calling for help (I assume the hospital staff have police scanners or something to intercept the call) staff from the mercy hospital arrive to pick up the man. They kindly offer the rest of them a ride to the hospital.

This is where it gets strange the hospital is staffed by a small crew of psychotics who use the inbound victims in bizarre experiments. Some of which are used to return the wife of the head of hospital back to health. The plot is fairly simple, you can watch it over a few beers. The movie is quite well executed so its fairly enjoyable right the way though. The only complaint (and its not a huge complaint) is that some of the shots seem over or under/exposed which is really the only give away that this would have been a low budget independent release. The gore and horror scenes look great with one particularly creative autopsy scene.

Over all Autopsy is not an all time classic. It’s definitely worth a watch once if you’re at a loose end. It’s quite enjoyable its also available to rent on youtube as well. Rather than pay out huge on importing the DVD you might be able find it second hand, if you’re into that sort of thing like I am.

Be sure to keep checking back on https://www.gorenography.com on a regular basis!