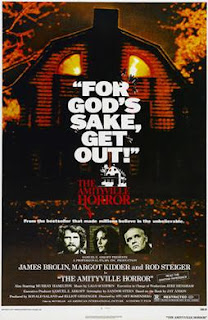 The premise of the haunted / possessed house  is hardly new. It has been a long standing staple of the horror genre.  I have to say The Amityville Horror is one of the better ones (along with Poltergeist)  and stars a very young and attractive Margot Kidder (from the Superman films) as Kathy a the mother of 3.

Kathy who along with her new husband, George unwittingly buy a house that was previously the venue for an entire family being slaughtered in rather mysterious circumstances.

The family of course get a great deal from their real estate agent and decide to move into the house. Ignorance is Bliss. It starts off great but within days the family start turning against each other against a back drop of bizzare occurrences. None of these ocurrences point immediately towards the supernatural, but it does start to test the patience and nerves of the father. Bit by bit the combined angst and tension starts tearing the family apart.

After consulting with medium friend of George’s it is ascertained the house resides on a burial ground of some sort. There is definitely something bizzare going on and the previously the house was occupied by a satanist. Either way the energy surrounding the house hasn’t dissapated or moved on and is still angry.

The Amityville Horror itself doesn’t have a lot of blood or gore. It is, however, a rather well written and shot piece which captivates the viewer without having to resort to this stuff. I really loved watching this film and can’t believe I got so far into my adult life without having watched it before. I’d say it would appeal to the same crowd that liked watching Rosemary’s Baby. It could be compared to a less explicit version of the Exorcist or the Omen. I loved the dark religious imagery, I found it set the scene for what was a genuinely engrossing film. I can’t recommend this film enough.

For more great horror movie reviews be sure to check out http://www.gorenograhy.com.