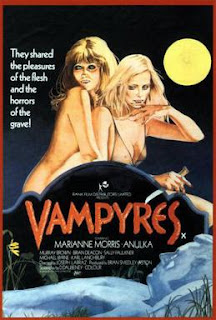 Some rather attractive babes from the 70s star in this one from a time when girls on film had natural knockers and pubic hair. It kind of has that Hammer film vibe but also that Roger Myers exploitational vibe as well. It’s well shot I have to admit. The problem is with all those giant natural knockers from the 70’s floating around its kind of hard to focus. Maybe it wasn’t that well shot.  Who knows really

Basically if you’re male (or female) fan of boobs and vampires the movie, Vampyres is pretty cool. Just don’t expect to come out any smarter for having watched it.

For more great horror movies and reviews be sure to check out https://www.gorenography.com

Also its on Youtube! so check it out below!