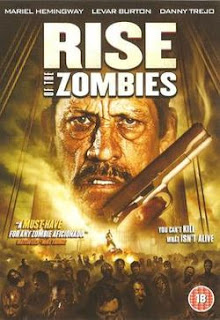 Over all, Rise of the Zombies is a pretty cool watch. One thing that really irritated me was that this was the second time I’d bought a DVD on spec because it looked like a cool horror movie with Danny Trejo in it. It was the second time he’d died quite early on in the film making his spot on the cover seem a little overblown. Making me feel a little ripped off.

Lack of Danny Trejo aside it was a pretty fun watch. The violence and horror certainly held its own against pretty much any zombie movie (even the more extreme ones). It really isn’t too much of a thinker, but more a fun way to watch zombies get blown apart for a couple of hours.

Basically the plot follows a zombie outbreak that seems to have pretty much taken over the whole of the earths population (at least as far as the handful of survivors in the movie can tell). Our “hero’s” are the last remaining survivors in and around the area of Alcatraz prison are both looking for an immunisation and a means of survival against the zombie outbreak. Simple enough plot that allows for a few friends or a few beers to get in the way without ruining the movie but plenty of action to keep it entertaining the whole way through.

Rise of the Zombies is not a classic by any means. It doesn’t it add anything to the genre either. It is however good fun and worth a watch at least once.

For more great movie reviews be sure to check out https://www.gorenography.com.