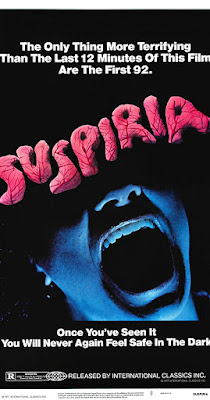 Well Suspiria was certainly a strange one.  Directed in 1977 by Dario Argento (later responsible for Demons in 1985). I really like this film. The colours in the filming are amazing and really help dramatize the whole affair nicely. It’s quite a striking affair too. Standing out as probably the only film I’ve seen that comes across in quite a manner. Visually speaking, the vivid colours give it a surreal / otherworldly feel to it. It’s hard to describe but I found myself quite mesmerized by the visual imagery. I don’t know that much about filming techniques, but I guess you’d have to see it to understand.

The plot itself revolves around a young lady Suzy who is accepted into a performance art school in Europe (Germany). She arrives late one night to see another student fleeing from the building. Co-incidently Suzi is not able to get into the building until the next day and decides to spend the night in a hotel nearby. Said fleeing student is then subsequently murdered along with her friend she has confided in in a gruesome double killing.  Suzy returns the next morning to the aftermath of the killing and some strange goings on in the academy.

The usual teething problems of gaining acceptance amongst her peers are present of course. There is also something much nastier, an occult evil, lurking beneath the surface of what appears to be a prestigious academy. A mystery which Suzy tries to get to the bottom of.

THE VERDICT ON SUSPIRIA

I have to say Suspiria is an enjoyable film but could be a little slow paced for the hardened gore fiends. I found it unique and entertaining. I’ll definitely be re-watching it to see what else I can get out of this film, as I suspect there’ll be more aspects to the plot that will be unearthed on a second viewing.

The gore levels besides the first two murders are not too extreme (though they were probably considered extreme for the time). Suspiria does not live up to the marketing hype as the scariest film ever (I always laugh when I see those by-lines on movie covers/posters), so it won’t make your non-horror friends loose their lunch, or think you need to be institutionalized either. Marketing hype aside it is a great film and it deserves its place on many of the all time classic lists it seems to appear on.

For more great horror movies be sure to check out https://www.gorenography.com on a regular basis!